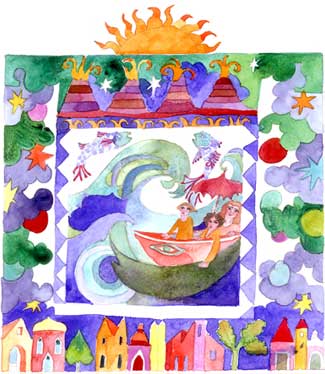 "Saturn and Venus this year in conjuntion !
What says the almanac to that ?"
Shakespeare. Henry IV

The History of Astrology

Astrology has been around for as long as people can remember. It has evolved independently in a number of different societies and countries. The leading populations of the world China, India and the Western World all have their own forms of astrology.

There have been great minds throughout history who have followed astrology, beginning with Abraham in the bible, Ptolemy of ancient Greece, Emperors of Rome such as Tiberius, Kepler the great scientist who earned his living doing astrological charts, John Dee the astrologer of Elizabeth I and in modern times the renowned psychoanalyst Carl Jung.

Why has it survived all of these thousands of years and why are people still fascinated by it ?

Unfortunately the common view of astrology now is what people read in the daily newspapers. This is not the true essence of astrology and is merely the tip of the iceberg of the real ancient art of astrology.

In ancient times people believed in a unified universe with purpose and meaning, in which all the elements were somehow connected and significant. Indeed man himself mattered and had a role to play. The planets too were not there just by coincidence but as part of some greater order. Their attributes such as position and colour were not just random but of true significance and meaning. The universe was at that time seen as a holistic universe where the individual parts were not to be taken in isolation to the greater whole.

What happened in the very big (The Macrocosm) was also reflected in the very small (The Microcosm or Man and his Psyche) as they were all part of the same whole. They were connected. As the planets indicated so there was a similar principle at work in the individual. By learning to read the language of the planets and what they were saying the same traits could be seen as functioning in the human being also.

With the beginning of the age of reason in the 1600's man discovered more and more his control over the material universe. The physical world took precendence over any abstract beliefs. Matter was broken down into it's essential elements. The idea of the universe being composed of the four elements, Earth , Air , Fire and Water was replaced by the far more complex periodic table. Events were analysed for their appropriate causes. No longer were occurences so mysterious or outside of ones control. Dealing with diseases such as the plague it was no use simply praying to an obscure deity. Practical day to day measures of hygiene and investigation of the cause were required. As time progressed more and more there were scientfic explanations and laws for things such as disease, navigation, evolution, the effects of gravity, the movement of the planets. This was all aided by technical discoveries of the age such as the telescope and the microscope.

Like a child playing with his toys, the awe the universe once had was replaced by a far more practical slant as people discovered how things actually worked. In a way one could say the universe lost a bit of it's wonder as there were now very definite scientific reasons for the occurence of various events. Indeed one could say these great immutable scientific laws that were discovered would run independently of man himself and in a way he was reduced to a mere observer.

For Science to be useful practical explanations had to repeatable and observable. Subjects such as astrology were marginalised while astronomy prospered. There were no directly repeatable provable formulas to prove astrology and it was and is now generally considered part of the old style of impractical and irrational thinking. Indeed to many scientists it provokes a hostile reaction precisely for this reason.

However in the 20th century things began to change again. Science started reaching limits as to breaking down the universe and it's laws. Matter could no longer be broken down in to smaller and smaller parts as in the process of breaking it new particles were made. Energy and not matter was as Einstein discovered the essential underlying cause of reality. Experiments showed particles were inherently connected and could communicate instantaneously even if they were separated across vast areas of the universe. With relativity man was put back at the centre of the solar system as it was discovered that he was an essential part of any observation made about the world. People also realised when questions of why were being asked Science had no answers. It could merely tell us how things operated. People who were now more comfortable materially thanks to Science searched back for an overall meaning that had been lost along the way.

The stage we are at now is that the old and the new are being reconciled. The ancient holsitic meaningful universe is being remembered and brought back, not at the expense of Science and all we have discovered but in addition to it, to once again give the material universe meaning.

For this astrology can play a major part as it can tell us about how we as individuals were created. What are our own unique talents and abilities, challenges and problems. What is it specifically we have an ability to do in this world above anyone else.